On the most gorgeous October 5 in California history (we swear), on a hillside overlooking the broad Pacific with a wee San Francisco in the distance, we exchanged vows and rings officiated by two dear friends in the presence of 75 friends and family. It was beautiful, and just the way we wanted it. 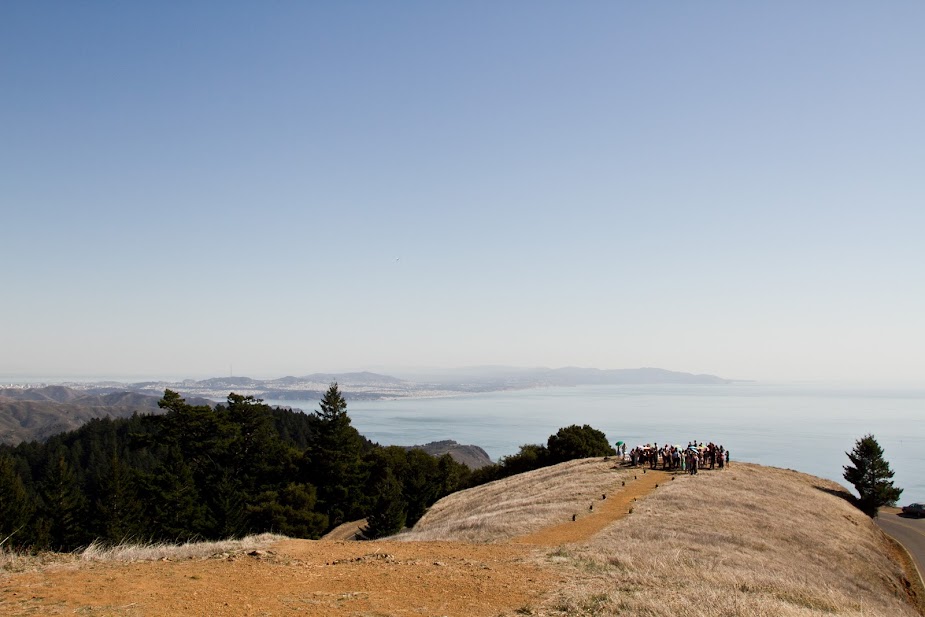 But it almost wasnâ€™t. The story of how gives us chuckles now, but mostly in hindsight. Several times in the week right before the wedding it looked as if it wasnâ€™t going to play out according to plan. Rehearsal evening, and literally up until the morning of The Day, we hit two roadblocks.

One of the effects of the 2013 Federal Government #ShutdownÂ was the closing of national parks. It was April who realized thatÂ Rodeo Beach, the beach weâ€™d chosen for the rehearsal dinner picnic Friday evening, is part of the Golden Gate National Seashore and might be off limits. We did some scouting of options — Rodeo, Crissy Field and Golden Gate Park (which was definitely out due to theÂ Hardly Strictly BluegrassÂ festival) –Â and saw that while facilities like parking lots and bathrooms were off limits, the beach and park grounds themselves were not.

So we launched Occupy Rodeo, telling everyone coming to the Friday picnic about the predicament and that we might have to bounce off Rodeo Beach to another spot.

When we got to Rodeo that Friday afternoon, there was indeed an officer standing next to a small barricade blocking off the parking lot, but she waved us on with a cheery “enjoy!” as we followed others out onto the beach. The weather cooperated wonderfully as we enjoyed locally made international food and drink. Once the sun set and stars came out, though, it got chilly quickly, sending us home.

Itâ€™s been dry and windy…

On Thursday at 1pm, while we were figuring out what to do about the #Shutdown, April got an email from the person who had given us the permit to hold our ceremony on Trojan Point (which is luckily not a national park), who asked her to call him right away. This time it wasnâ€™t the Government interfering, but Nature: the local fire department had put a Red Flag Alert out for the northern part of Mt. Tam due to heat, dryness and high winds. Our reception spot was still safe, but the ceremony site was off-limits until further notice.

END_OF_DOCUMENT_TOKEN_TO_BE_REPLACED

Weâ€™re just back from a fantastic trip to Colorado.Â  Although the new decade is off to a good start for us, our IDLO adventure is over, so this year hasnâ€™t included nearly the shared travel experiences that 2009 did. Weâ€™re happy to journey closer to our own backyard.

We spent the better part of the week in Denver, Colorado Springs and Boulder.Â  Despite having traveled halfway around the world a half-dozen times together in less than three years, we still hadnâ€™t made it to Colorado (where April spent many years growing up).Â  So we were overdue for a â€œtrip down memory laneâ€ and to reconnect with family and friends. We were blessed with great people, great weather, and great fun throughout our time. Â  END_OF_DOCUMENT_TOKEN_TO_BE_REPLACED

It’s been a good month, including a special trip to Atlanta to visit April’s Italian family there, fun get-togethers with friends and gloriously sunny weather in SF.Â  But the highlight definitely occurred on January 29 (April’s birthday) just before sunset, along Crissy Field between views of the Golden Gate Bridge and the lavender-pink-gold hues of the city and bay beyond…

The setting was perfect, and the moment caught April quite by surprise.Â  After a lot of smiles, laughter, hugs and just a few tears, we celebrated with some very good wines, our favorite Noe Valley restaurant and to-die-for gourmet cupcakes (with lots of frosting, of course).Â  Since then we’ve been sharing the news with family and friends, and the outpouring of love from them has been tremendous.Â  We feel truly blessed in life! No other details are available yet (‘cept a picture of the ring).